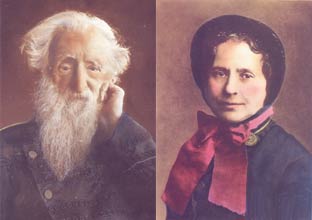 One of the original “power couples” in Christian history was William and Catherine Booth who together formed the Salvation Army. After they were married on June 16, 1855, their desire to win souls turned to the very practical meeting of needs by teaching women to sew, providing food for the hungry and establishing schools. After William was kicked out of the Wesleyan Methodist congregation he began to preach in the countryside of England and Catherine believed she could preach as good as William. So when they founded the Salvation Army in 1865 they allowed women to preach and hold leadership positions. Catherine died of cancer in 1890 and William lived another 22 years carrying on their work.