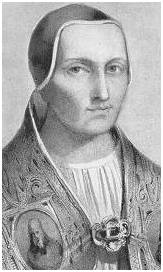 How cool do you have to be in order to be made into an action figure?  Pope Innocent III made the cut.  When he was elected Pope on January 8, 1198, Innocent III ushered in a renewed era of increased papal authority after one of the lowest occasions in the Church’s history called the Avignon papacy when 3 different men claimed the papal throne. He was the first to be called the Vicar of Christ.