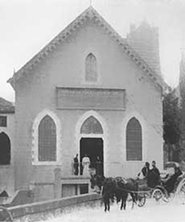 Eli Smith wanted to understand the Arabic people so much that he lived on a farm in Beirut and immersed himself in Arabic culture. Why? So he could print the Bible in Arabic. A printer by trade and trained at Yale and Andover Seminary, he eventually took over the press operations in Malta and even invented a font called American Arabic. When he died on January 11, 1857, he had begun his life’s work of an Arabic language Bible that was completed by his successor. This is a picture of the printing house in Malta where he worked