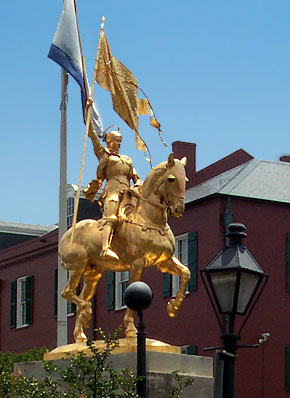 One of the most famous women in Christian history is Joan of Arc. The Hundred Years’ War between France and England was bitter and long-fought (that’s how you get the name 100 years’ worth of war!) over the control of France and this peasant girl named Joan from the Orleans district joined the fight. Convinced she was told by the Archangel Michael to fight the English, she was eventually captured and brought to “trial” by the local bishop and ordered to be burned at the stake. On May 30,1431 she walked to the town square and shouted “Jesus!” as she took her last breath. She was 19 years old and 25 years later Pope Callixtus III would have her trial re-examined and claimed her innocent and a martyr. She was canonized as saint in the Roman Catholic Church in 1909. This is a statue of her in New Orleans, Louisiana