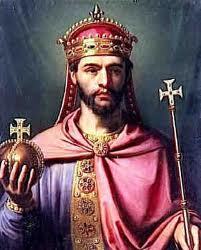 As Charlemagne the Great, the first-ever Holy Roman Emperor, prepared for his death, he named his only surviving son Louis to be co-emperor with him on September 11, 813. Louis became known as Louis the Pious because he sought to bring the empire closer to God by cleansing the public courts of pagan images and also did public penance before the Pope for his involvement in the killing of the King of Italy (who also happened to be his son, Bernard).