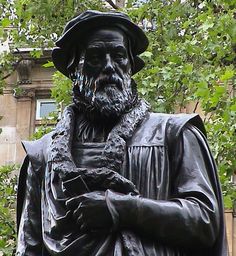 William Tyndale understood the benefit of publishing the Bible in the English language but neither Pope Paul III nor the English King Henry VIII agreed. Tyndale fled England for Belgium to finish publishing the English Bible but Henry sent hitmen after him who rooted him out and strangled him to death at Vilvoorde Castle not far from Brussels. To make a public statement, Tyndale was burned at the stake after his death on October 6, 1536.