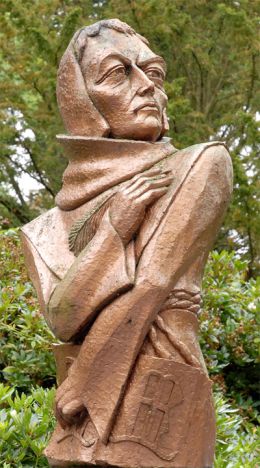 The idea that Mary, the mother of Jesus, was born under an immaculate conception as was Jesus Himself, was first put forth by a Scottish theologian named John Duns Scotus. Scotus, who died on November 8, 1308 in Cologne, Germany, would have been pleased to know over 500 years later Pope Pious IX would agree with him and make the Immaculate Conception of Mary a central part of Roman Catholic theology. This is a picture of a statue of him in Duns, Scotland.