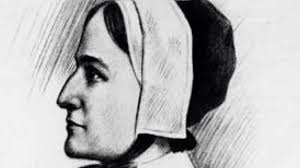 For all their talk of religious freedom, Pilgrims were not very tolerant of dissent. Just like Roger Williams, Anne Hutchinson was kicked out of the Massachusetts Bay Colony as the results of a trial – hers began on November 2, 1637. She was found guilty of “traducing” ministers because she held meetings in her home of women to discuss their thoughts on sermons and Christian life. Also, like Williams, she founded a colony after banishment that would become part of Rhode Island.