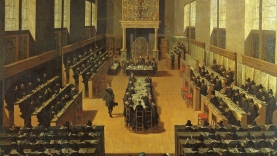 The “fix was in” when the Dutch Reformed Church called a church council meeting (known as a synod) in the city of Dort on November 13, 1618. The Calvinist synod was called to discuss what to do about the growing number of Arminians in Holland and how to condemn ministers who didn’t buy into predestination and other Calvinist doctrines. By April of the next year, 15 ministers were arrested, over 200 were deposed from preaching and a statesman-protector of the Arminians, Johan van Oldenbarnevelt, was beheaded for treason.