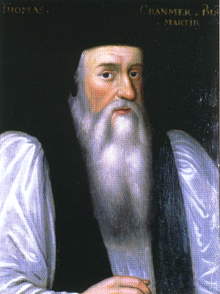 When Henry VIII appointed Thomas Cranmer Archbishop of Canterbury on March 30, 1533, Cranmer wasn’t crazy about the idea. He eventually gave in and used his influence to do two things: grant Henry his long-desired divorce from Catherine of Aragon and to make the Church of England more and more Protestant. None of that set well with Catherine’s daughter the very Catholic Queen “Bloody” Mary who had Cranmer burned at the stake.