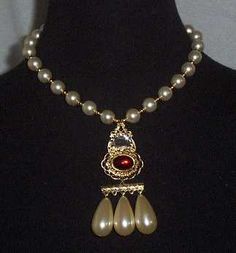 For almost 75 years during the 1500s England would flip back and forth between the official church being Roman Catholic or the Church of England. When Queen Elizabeth I died on March 24, 1603 there was a question if England would stay Protestant but her cousin and successor King James I sealed the deal and it’s been the Church of England ever since. This is one of Elizabeth’s many necklaces (the pearls may have belonged to her mother Anne Boleyn).