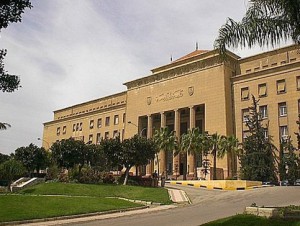 As the world watches how Christians are being persecuted in modern Middle Eastern counties, it isn’t the first time. On March 18, 1980 a Christian student at the University of Alexandria, Egypt refused to deny his faith to an angry group of students. The students then beat the young man, known only as “Mr. Edmonds”, to unconsciousness and broke his arm. This is a picture of the main administration building.