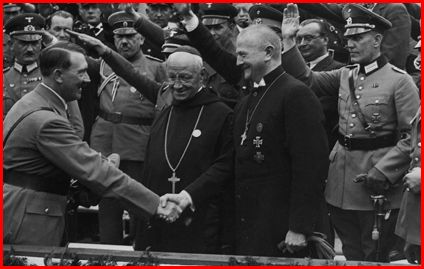 Have you heard of the Confessing Church? As the Nazis began to take more and more power in Germany during the 1930’s one of Hitler’s goals was to silence the church. He knew as the country began to see what evil lurked in his heart he didn’t need the church’s morals to get in his way. Because the pastors were on the government payroll most of them turned a blind eye to the Nazi regime and on January 4, 1934, Hitler’s church puppet leader Reichs-Bishop Ludwig Mueller issued a decree telling all churchmen to hush up about Adolph and give him their support. This is a picture of Mueller and Hitler at a rally. The Confessing Church refused to go along with Mueller/Hitler and created an underground movement lead by men like Karl Barth and Dietrich Bonhoeffer.