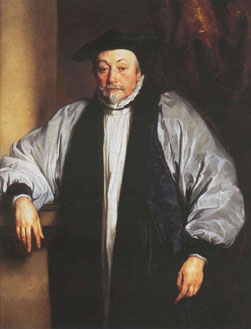 When William Laud became Archbishop of Canterbury (meaning he was the head of the Church of England) it should have been no surprise because he was an astute politician who was able to “climb the church ladder” very quickly. He preached and taught the idea that the King of England (then Charles I the son of King James) had the divine right to rule England because Charles was God’s chosen one. That’s good a way to have the king like you. But William wanted to use the power of his office to force more stringent rules on the kingdom and he told the Scotch Presbyterians they must use the Book of Common Prayer and told the Puritans they must learn to follow church structure as he defined it. Neither group liked that and after a series of events Parliament was called together and a bill was introduced to show Laud was subverting Protestantism in England and on January 10, 1645 he was beheaded in the Tower of London.