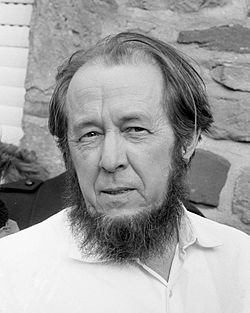 Aleksandr Solzhenitsyn hated the Soviet state of his beloved Russia and was accused of trying to overthrow Stalin’s government. He was arrested and eventually sent to the Russian prisons called gulags on February 9, 1943. While in the gulags he would come to know Christ and ended up winning a Nobel Prize for Literature in 1970. His speech entitled “Godlessness: the First Step to the Gulag” was a warning to America that he saw many of the same patterns in the US as he did in Communist Russia when he delivered an acceptance speech for the Templeton Prize in 1983.