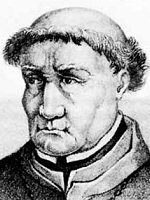 One of the darkest spots in the history of Christianity was the Spanish Inquisition. King Ferdinand and Queen Isabella wanted to force people to be Christians and if they weren’t sincere enough, they would often resort to torture. The priest Tomas de Torquemada (tork-a-mada) was the chief torturer and was appointed to his post as “inquistioner” on February 11, 1482 by Pope Sixtus IV at Ferdinand and Isabella’s request.